Azal is a renowned pop rock band from Karachi and an assemblage of four members; Shahbaz Khan (music composer, keyboards), Qaiser Zain ul Abedien (drummer), Ehtasham Khan (vocalist, lyricist) and Rajab Ali Khan (vocalist). Their work is pure embodiment of eastern melody amalgamated with western rock culture and lyrics narrate stories that are contemporary yet draped in conventional and sometimes streetwise words.
Azal aims to make a niche for itself through its youthful and thought provoking melodies.First single of Azal, “Aisi Taisi” was the biggest hit in the music industry of Pakistan. The band also contributed hugely to one of the Indian movies “Singh is King” and received enormous praise for their work across the border. Azal is working on their second album these days. Natasha Baig is an emerging sufi rock singer from the lush green meadows and valleys of Hunza. She started singing professionally in 2013 through a reality show, Cornetto Music Icons where she was trained and mentored by Zoe Viccaji. After Cornetto Music Icons, she joined Ahsan Bari’s musical orchestra named Sounds of Kolachi and further delved into the music industry. In 2016, she sang a song for a movie Janaan, and now all set to release her first collaboration with Mai Dhai.
Natasha was also the producer of the “Laal Series” through which she managed to pull off a concert where she gathered almost all the leading female vocalists of Pakistan including Zoe Viccaji, Mai Dhai, Sara Haider, Alycia Dias and herself.

Rap Engineers is an experimental hip hop crew from Islamabad, Pakistan originated in 2005 who pioneered the ‘Sufi Rap’ genre and the first ones to merge eastern classical with hardcore rap. Their track ‘Conflict Management’ went viral which embodied experimentation with soul and became the signature sound for Rap Engineers. Rap Engineers track ‘Darinda’ was BBC Song of the month in April 2016.
Xpolymer Dar and Maddy Khan were the initial members of Rap Engineers. Yaruq Masood Malik joined this venture in 2011 and the band expanded their sonic possibilities by reaching out to the hip hop producer in Pakistan, Usman Ghauri. Ghauri became a part of Rap Engineers in 2015 and has been working with Yaruq, Xpolymer and Maddy for the anticipated album. Sattar Jogi is a master musician, story teller and a snake charmer hailing from the Jogi tribes of Tharpakar Sindh. His stories and knowledge of folklore and folk wisdom is equal to his mastery on the Murli instrument and he is a teacher and mentor to many diverse musicians of the area.Sattar jogi is an expert snake charmer who is leading the way towards promoting and introducingthe Jogi culture to a wider audience.

“Sibti & the Retrosexuals” is a rock n roll band from Lahore that has been in the local music scene since 2012. Three time nominee at the Lux Style Awards, Sibti either works with a band lineup with multiple singers and guitar players or performs with his good old “Plastic Fantastic Trio”

With Sibti on guitar and vocals, Hamza Shahbaz on bass, Asad Farooq on drums and Jibran Saeed on saxophone they produce music that is new, fresh and edgy.The songwriting is one of a kind as well.

Sibti has an album under his belt called ‘Book of Sibt’ which was released last year and is available on Patari. Songs for the next album are also ready and the band is waiting to get into the studio to record them. “Sikandar ka Mandar” is an Indie rock band from Karachi that believes in blending acoustic guitar melodies of traditional folk and rock music with contemporary instrumentation. Their first self titled album came out in 2014. The theme that tied the eight songs in the album together was the idea that one should look for and project positivity no matter how dark and grim things may seem.

Sikandar ka Mandir comprises of four musicians; Ali Suhail (lead guitarist), Rahail Siddiqui (Bassist), Raheel Manzar Paul (Drums) and Nadir Shahzad who is the founder of the band as well as lead vocalist. The second album titled 36 is scheduled to come out in 2017.

Zeek Afridi is a Pashto singer who comes from Tirah Valley of KPK. His first album “Bibisherinay”, a selection of folk songs in Pushto, took Pakistan and Afghan communities by storm. Due to the popular demand of the song, he released the translated version of Bibisherinay in Urdu afterwards.

Zeek Afridi has also performed in national and international concerts including concerts in Dubai, Derby and Nottingham Mela UK and received enormous praise for his music. “Bulbulik” is a first ever group of young musicians from Hunza, Gojal that is coming to perform at FACE Music Mela 2017. The initiative was taken with an aim to preserve and promote the rich but endangered heritage of folk music of Wakhi/ Pamirians living in the beautiful valley.

The group consists of folk artists, who have graduated from the folk music school of Gojal and play folk tunes and sing beautiful traditional songs of valley with the instruments like Rabab, Sitar and a violin like instrument called γ̌ažək in the local Wakhi language.

Surge is an Islamabad based rock metal band and was formed in the summer of 2002.The band consists of Najaf Afghan on vocals, Tipu Sultan on guitar, Shehreyaar Ghayas on bass, Sarmad Ghafoor on keyboards and Salman Rafique on drums. Sarmad performed several gigs in the federal capital from 2002 to 2004 and built a strong local following with their original songs “Ghulaam” “Raat” and Fidaeein among others.
The band has reformed again and composing new songs which they also are performing at the FACE Music Mela 2017. Uzair Jaswal is a young pop musician from Islamabad who started singing at the age of 19. His track Nindiya Ke Paar was a hit and featured in coke studio season 5. Other famous singles include Tere Bin, Jaanvey, Yaheen and Bolay. Uzair Jaswal made his debut in playback singing with the bollywood movie Ek Paheli Leela in 2015.

Zoha Zuberi is an Islamabad based self taught pop/rock musician and artist, who started off her career in 2012 as an underground cover artist and gained recognition for her unique style and voice. Her first original was released in 2016 titled “Kab Hua” which was well received all over social media. She hopes to inspire her audience with her music. Rabia Ali is a Persian dancer who was born in Corpus Christi, Texas and began to perform as a dancer in 2013 with Ravaan Persian Dance Academy. She has received training in Persian classical and folk dance under the tutelage of Geeti Shirazi Mahajan, with additional training under Shahrzad Khorsandi and Tara Pandeya. She has also received training in Kathak (North Indian classical dance) from Varsha Jawadekar of Nritya Varsha Academy, and is currently training under renowned Pakistani Kathak dancer Umair Arif. The Canvas is an emerging music band from Islamabad who play blues, alternative and soft rock. The band consists of five members, who together discovered they have chemistry for creating new original music with an old school vibe to it. The band members are Asad Saeed on classical guitar, Nomaan Haq on vocals, Junaid Asad on electric guitar, Adil Azhar Bhatty on bass and acoustic and Allan Smith on drums.

Iqbal Baloch plays a classical instrument banjo, which he learned from his father. He received an award in 2012 for playing Banjo beautifully and has performed in different cities of Pakistan. Iqbal Baloch and his group members, who play classical instruments like Rabab, Jhangar and Dholak, mesmerize the audience with their performance. Pluto Republic is a new upcoming music group and FACE Bandwagon finalist from Iqra University Islamabad, that will be performing for the first time at the FACE Music Mela 2017. The band comprises of 15 young talented musicians with an aspiration to create fusion between all genres resulting in uniquely fresh music. Ali Ashraf is an indie rock musician from Islamabad. His first album “Paheli” is a mix of progressive rock with eastern music structure and came out in 2016. The second album “Kala Peela Neela” is all set to release this year.

Imran Fida is a sufi musician from Lahore who learned singing from his father, a renowned folk vocalist, Fida Hussain. His collaborations with artists from various countries during ‘Dosti music project’ further helped him master his skills.
The classical singer is dedicated to preserving Pakistani traditional music while experimenting with current pop styles of singing. Mai Dhai is a folk singer and percussionist from the Manganiar tribe of Tharparkar, Sindh. She took her music training at the age of ten from her mother.Mai rose to fame after performing in the US at SXSW Music 2015 and featured in music series Coke studio season 8 where she sang two songs including Kadi Ao Ni and Aankharli Pharookai with Atif Aslam & Karam Abbas Khan respectively. Her traditional songs are about the Kings and Sufis as well as on occasions such as marriage, birth, feasts and rains. Ravi da Jhoomer is a Punjabi folk dance group that presents the traditional jhoomer dance. Jhoomer dance is originated from Punjab and the word comes from ‘Jhoom’ which means swaying. 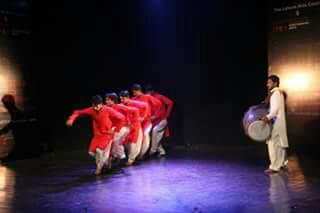 Adnan Jahangir is a Kathak exponenet and choreographer, who is a graduate in Communication Design from National College of Arts, Lahore Pakistan. He got the opportunity to learn classical dance from his teacher Bina Jawad in 1999 and has been representing Pakistan nationally and internationally since then.